Now that most events and meetings are cancelled due to the Covid19 quarantine measures, I thought it would be interesting to share some reading material. My first recommended pick is the article that started the field of Artificial Intelligence: Alan Turing’s paper ‘Computing Machinery and Intelligence’, published in Mind in 1950. 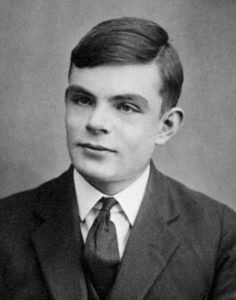 British mathematician Alan Turing was born June 23 1912 in London. He studied as an undergraduate at King’s College London and from 1936 to 1938 visited Princeton. His first well known work is his 1936 paper on Computable Numbers, where he introduced the concept of the Turing machine. Turing machines are the most simple mechanical computers based on paper tapes. He proved that anything computable on any Turing machines was computable on the universal Turing machine, introducing the idea of a programmable general purpose computer. In the second world war, he joined the British codebreaking organisation Government Coder and Cypher School, where he continued the excellent work by Polish researcher Marian Rejewski to break the German Enigma code. His work had a major impact on the second world war and he did receive an OBE title. He never received public recognition for his wartime work since it was a government secret.

In 1952, he was convicted for homosexuality, which was a crime in England and Wales until 1967. He was forced to undergo hormone treatment. In 1954 he died, most likely suicide by eating a poisoned apple. In September 2009, the UK government issued an apology over his treatment. For more information on Turing’s life: read Andrew Hodges’  1983 Turing biography (Alan Turing: The Enigma) or check the Alan Turing wikipedia article). Image from Wikimedia (Alan Turing aged 16). In. 2019, The Bank of England featured him on a new Fifty pound note.

The paper ‘computing Machinery and intelligence‘ introduces the question ‘Can machnines think?’. Instead of directly answering this question, he proposes a test, the so-called Turing test or the ‘imitation game’. In this test, there is a chat conversation between the tester and two subjects. One of the subjects is a person, the other is a computer or chatbot. It is up to the tester to find out using questions which subject is the person and who is the computer. After introducing the test, Alan Turing proceeds to ‘consider nine  opinions opposed to my own’:

This test introduced in this paper is a practical answer to a philosophical question. It has lead to new insights and new discussion about whether this is a valid test for true machine intelligence. The paper itself discusses several interesting objections you could have against the validity of the test.

The paper contains several examples with hidden ‘Easter eggs’. For instance, try to understand the chess example first to see if it makes sense. After doing this, read ‘The Chess Example in Turing’s Mind Paper is Really about Ambiguity‘ by Dr. Jeroen Fokker.

Other interesting examples include questions on poetry and on the taste of strawberries. I am not sure whether I as a non-native English speaker would pass this test against a well-educated chatbot.

This paper has been widely read by Artificial Intelligence researchers. The Stanford encyclopedia of philosophy contains a very lengthy discussion with many references.  To name just one: Searle proposed the ‘Chinese Room Experiment’ as a response to this test. It has become the classic starting point for the philosophy of artificial intelligence. Now that chatbots have become real, it has new relevance. The Loebner Price is an annual Turing test competition, mostly won by humans but with some honourable mentions of computer programs.

As a side note: Although the Turing machine was invented as a hypothetical machine, several people have programmed or built actual Turing machines. Mike Davey built an actual paper tape based machine and put the result on youtube. The built process is described at aturingmachine.com. There is also  a short documentary about the LEGO Turing Machine built by Jeroen van den Bos and Davy Landman at Centrum Wiskunde & Informatica (CWI), Amsterdam (Netherlands). They built it for CWI’s exposition “Turings Erfenis” in honor of Alan Turings one hundredth birthday this year.