The steps of  PDCA

PDCA can be applied whenever you consider making a change in your organisation. Whenever you decide to install new firewalls, change the content of a training, decide on a new policy or ask people to change the way devices are installed. For each change, the basic four steps are the same: Plan – Do – Check – Act.

The image below, inspired by a similar image by Johannes Vietze on Wikipedia, illustrates the idea of adjusting the metrics every step. After a successful change you reach a higher quality level and the new level becomes the baseline for evaluating the next change proposals. 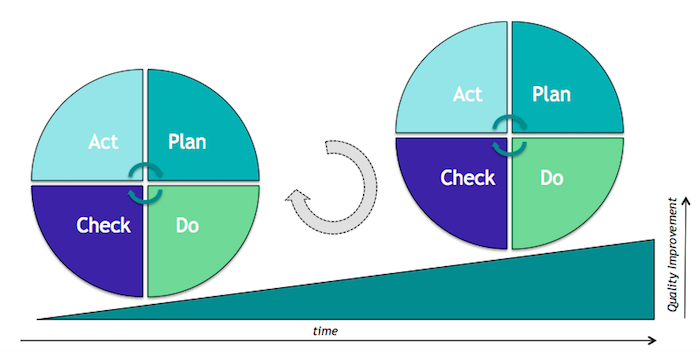 The origins of PDCA: The Deming cycle

Plan-Do-Check-Act is also called the Deming Cycle because it was popularised by William Edwards Deming (image from Wikipedia). Deming was an American productivity consultant who lived from 1900-1993. Deming himself popularised his improvement cycle when visiting Japan after the second world war. He based his ideas on continuous improvement on the work of Walter Shewhart, and always referred to ‘his’ cycle as the Shewhart cycle.

The cycle is called Plan-Do-Check-Act because it consists of these four steps (plan, do, check and act). Deming himself renamed the check step to study, so a better name would have been Plan-Do-Study-Act or PDSA. Whatever name you choose, it all refers to the same framework for achieving continuous improvement. Deming developed the cycle when teaching in Japan in the 1950s.

The cycle was invented for improvement of manufacturing processes, but is now used for all kinds of processes, including enterprise processes such as information security. It was actually a mandatory method is the 2005 version of ISO 27001. In the current 2013 version one can choose which improvement method to use. PDCA is still the most commonly used method, either because of its simplicity or because it is easily mapped to existing continuous improvement efforts in an organization.

Why continuous improvement is important

One of the key insights from these expert visits is that one cannot improve a factory in one step. Each factory has a complex process with many different activities that are interdependent. Each factory has many smaller inefficiencies in many different steps, that all add up to the difference in productivity. A consultant visiting once is not able to pinpoint one big issue and make a single improvement. Consultants therefore concluded that they should not focus on immediate changes. Instead they focus on creating a culture of continuous improvement. They teach line workers, team leaders and other staff the importance of improving their part of the process. Indeed of Deming’s key principles is:”Put everybody in the company to work to accomplish the transformation”. The entire factory staff is thus responsible for and involved in identifying issues and proposing process changes.

The importance of experiments and validation

Another core idea behind PDCA is the importance of experimentation and validation. PDCA is based on an experimental, data driven approach to improvements. For example, suppose one factory worker believes a part is redundant, and proposes to just leave out the part. This proposal is interesting but risky. It does save time and money to leave one part out of a car. However one cannot be sure without careful testing whether this causes problems later on in the production process or the finished product. PDCA handles this problem by insisting on measuring the results of changes, and having people evaluate each change to see if it actually works. This idea of continuous improvement is now part of many improvement methodologies, such as the Toyota Production System, Total Quality Management, Lean manufacturing and Six Sigma.

Within information security, there is a risk of getting stuck at a mediocre security level. After the initial start of the information security team, the easy fixes are implemented and it will not be clear which controls are important and which are more trouble than value. Experimentation and validation will help you to only implement valuable controls.

Note that when you use a standard such as ISO 27001 or Security Verified, the idea of continuous improvement will be implemented at multiple layers. The internal audit plan is an example of an annual PDCA cycle. The information security team meetings will be based on PDCA. In each information security area, you will probably implement checks and information collection steps that provide feedback loops.

For more information on the historic background of PDCA and Deming, we recommend the paper ‘Evolution of the PDCA cycle‘. An interesting book on the manufacturing background of continuous improvement is ‘The machine that changed the world‘.